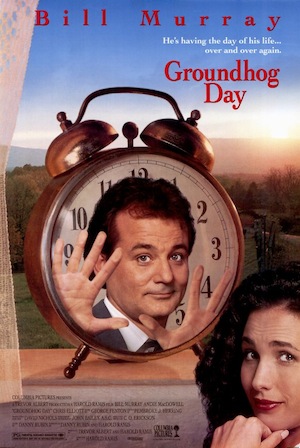 A well-loved 1993 film that massively popularized the time loop trope. With Bill Murray at his deadpan best and a much lauded script, the film is considered a modern classic.

Phil Connors, an arrogant and smarmy weatherman for a Pittsburgh local news station, his new producer Rita (Andie MacDowell), and cameraman Larry (Chris Elliott) go to Punxsutawney, Pennsylvania to film the Groundhog Day festival. Phil loathes the annual celebration and is surly throughout the proceedings, wanting nothing more than to pack up and go home. That proves impossible when a sudden blizzard arrives and closes the roads, forcing Phil and the crew to stay the night.

A few times round the loop, and Phil starts to see the upside. He can do anything he wants, with no fear of the consequences because tomorrow will never come. He can manipulate the townsfolk with ease using what he learned about them in previous iterations, he can steal money with perfect knowledge of when nobody will be looking, and even if the cops do catch him, he knows "tomorrow" he'll just wake up in his bed like nothing happened. Soon he is living a dream life, with enough wealth to buy everything Punxsutawney can offer and inside knowledge that lets him talk every girl in town into bed.

Every girl but one. Rita remains resistant to his charms. No matter what he tries, he cannot find the magic sequence of words that will win her. Even when he tells her everything she's told him she wants to hear, she still detects his insincerity, and rebuffs him. He learns French poetry for her and she still keeps him at arms length.

Frustrated by his failure and the endless, unchanging repetition of the day taking its toll on him, Phil falls into despair. He first tries to kill the groundhog - then, when that fails, he tries to kill himself. However, even death can't stop this curse and he wakes up the "next" morning. Nothing works and he soon finds himself drowned in monotonous apathy, uncaring for anything. Eventually, he talks to Rita, telling her about his predicament and asking what she'd do. Rita, for the first time detecting something sincere and likable within Phil, convinces him to look at the cycle as an opportunity not just for self-indulgence, but for self-improvement. For a brief period, Phil starts doing good deeds, but still mostly as a ploy to break free of the endless cycle. But even so, something inside him is starting to change.

After literally years of knowing the people of Punxsutawney, he comes to genuinely care for and love every one of them. This inadvertently allows him to gain the one thing he needed to earn Rita's love: a sincere and kind heart. Going through the motions of his charity work one day, he decides to take Rita along to show her what he does. By then, he takes his actions seriously. This culminates in a single perfect day, which is enough to win Rita.

The next day he wakes up to a brand new day, full of promise.

Groundhog Day was added to the National Film Registry in 2006.

Then put your little hand in mine...