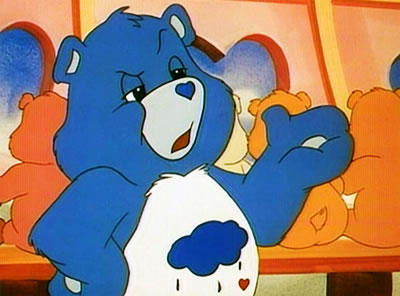 Not even being the Trope Namer cheered him up.

The exact opposite of the Wide-Eyed Idealist. A Grumpy Bear is grim and gritty, ready to do the most unspeakable deeds to win. Yet he's living in a world of rainbows and fluffy bunnies! This character is a Genre Blind cynic living in an ideal Happily Ever After setting; the Grumpy Bear lives in a rose-colored world, is constantly frowning and is wearing Jade-Colored Glasses.

Can be treated as a Butt Monkey—and the audience is primed to laugh rather than worry about their misfortunes. Often an Ineffectual Loner to boot. Unlike his polar opposite (who will inevitably die or get its ideals smashed and be rendered a hollow shell of its former self), the Grumpy Bear will at least get through a cynical story in one piece. He will either learn An Aesop about The Power of Friendship and The Power of Love and live—well, Happily Ever After, or at least be left alone, its grumpiness being mainly used for comedy.

A Grumpy Bear who works with the other characters despite his skepticism is a Sour Supporter. This trope is a specific type of Anti-Hero.

Compare The Eeyore, who's miserable rather than grumpy.

Examples of Grumpy Bears include:

In the manga, it's explained that they basically were ordered by the Queen to live alone in their individual castles at the far reaches of the solar system while the kingdom was destroyed. When they abandoned their posts to try to find the Queen, they accidentally summoned Sailor Saturn and destroyed all of existence. That would pretty well explain their loner natures and pessimistic attitudes (wanting to save their home and all). This is also why they become a lot more social and friendly after that arc, when they learn that Saturn is not just a force of destruction and decide to raise her.

These traits were recycled into Edo in Yu-Gi-Oh! GX, who not only strove to be an Anti-Hero, but seemed to think he was Batman. This was because he thought he was a slave to his fate; pity for him that the season's theme was Screw Destiny.

Retrieved from "https://allthetropes.org/w/index.php?title=Grumpy_Bear&oldid=1743493"
Categories:
Cookies help us deliver our services. By using our services, you agree to our use of cookies.