Everything About Fiction You Never Wanted to Know.
(Redirected from Gundam Unicorn)
Jump to navigation Jump to search 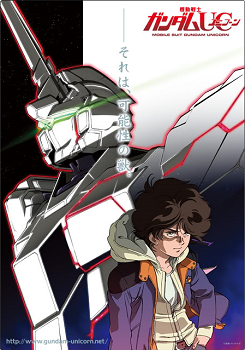 Humanity alone possesses a God. The power to transcend the now... the inner God called "Possibility."

"The beast of possibility finds its master and soars through a shaken cosmos."

Universal Century 0001
The Earth's population is finally united under The Federation, migration into space colonies begins, and a celebration is underway at the Laplace space station. The space station is blown to tiny bits.

Universal Century 0096
Three years after Char Aznable almost hit the Earth with a giant rock, Banagher Links stumbles across a mysterious and attractive girl calling herself Audrey Burne. Meanwhile, a clandestine deal between the Vist Foundation and renegade Neo Zeon forces led by a Char-lookalike named "Full Frontal", involving an artifact called "Laplace's Box" that's said to contain the power to destroy the Earth Federation if ever opened, goes very, very wrong. Next thing Banagher knows, the colony is collapsing around him and he's fallen into the cockpit of an obscenely powerful mobile suit, the Unicorn Gundam.

Looks like it's back to business as usual, then...

This seven-episode OVA began syndication in 2010 and is based on a novel series by Harutoshi Fukui, famous for his military novels about the Imperial Japanese Army and Kaiju Defense Force, and infamous for adding militaristic flavor and portraying the Japanese military as heroic, which makes Japan's neighbors go a bit... crazy.

As of this reading all seven episodes have been released on Playstation Network and Blu-Ray/ DVD. With each episode being released roughly six months apart save for the sixth and seventh episodes, which will take a year each, the series will take about four years to fully air. The last time this occurred was with Mobile Suit Gundam: The 08th MS Team[1], which took three-and-a-half years.

In April 2016, Mobile Suit Gundam Unicorn RE:0096 began airing, a TV series reediting the OVAs which is slated to expand significantly on the source material while including new and reworked scenes. Episodes are posted for free on the official GundamInfo YouTube page.

Note: This page contains spoilers for the completed novel series which the OVA has not reached yet. Highlight with caution.

Bridge officer: The lead machine is approaching at... three times the speed of the others!