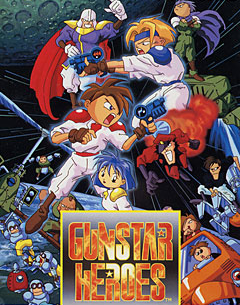 Gunstar Heroes is a cooperative Run and Gun game released on the Sega Mega Drive/Genesis by Treasure in 1993. In it, Gunstars Red and Blue are protectors of Earth, attempting to stop a dictator named Smash Daisaku from collecting powerful Mystical Gems in order to awaken a planet-destroying beast known as Golden Silver.

At least, that's how the U.S. release describes it.

That being, you (partner optional, but highly recommended) take control of either one of Red and Blue and traverse several levels of increasing chaos and explosions. What really adds to the run and gun nature of it, though, is how the two playable characters differ in action, as well as the clever weapons system. Technically, Red is Free Shot - meaning you can run and gun at the same time with the primary drawback being that it's a bit harder to aim in a specific direction (since... you move when you fire); counter to this, Blue is Fixed Shot, he can't move and fire but is capable of firing in all 8 directions. This doesn't seem like much of a difference at first, but when you add that certain weapon combos work better for certain types - it allows for a wide variance in playstyles.

A single-player sequel, Gunstar Super Heroes, was released in 2005 for the GBA, and sets up a new team of heroes (who have the same names as their predecessors) to fight against The Empire once again to stop Golden Silver from reviving a second time.

The original game was first made available post-Genesis on the PlayStation 2 Sega Ages series (with less slowdown) which... alas... is a fine example of No Export for You. However, it is now available for download on Virtual Console, Xbox Live and PSN.

Tropes used in Gunstar Heroes include:
Retrieved from "https://allthetropes.org/w/index.php?title=Gunstar_Heroes&oldid=1731394"
Categories:
Cookies help us deliver our services. By using our services, you agree to our use of cookies.