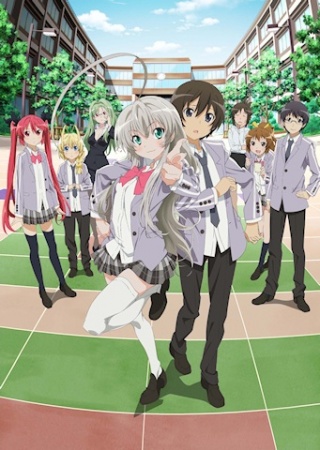 Mahiro Yasaka is an Ordinary High School Student who happens to be a fan of the Cthulhu Mythos. One day he was attacked by a creature he identifies as a nightgaunt, only to be saved by a White-Haired Pretty Girl... who introduces herself as none other than the Crawling Chaos, Nyarlathotep.

Haiyore! Nyarko-san is a 2009 Romantic Comedy Light Novel series written by Manta Aisora and illustrated by Koin (of Kanokon fame) with elements from Toku and the Cthulhu Mythos. It isn't as bad as you think, though, especially since it doesn't take itself all that seriously. As it turns out that while the mythos beings are real, H.P. Lovecraft pretty much exaggerated the stories from his Nyarlathotepian friend and turned them into horror tales.

The series has been well-received in Japan, spawning numerous drama CDs and a nine-episode short-flash anime called Haiyoru! Nyarani. An 11 episode TV flash series called Haiyoru! Nyarani Remember my Love(craft-sensei) aired in Winter 2010, followed by a traditional animation season come the Spring 2012 Anime. The opening for said anime would achieve memetic status on Nico Nico Douga with the Un! Nya! Let's GO! portion of the opening.

Being a slapstick comedy based on the Cthulhu Mythos, it's a pretty violent story. It is also a hurricane of anime and manga Shout Outs and Mythos-ology Gags.

Crunchyroll has also simulcasted the anime and it can be found here.

These are the Tropes that crawl up to us with a smile!

Mahiro: "I'm definitely gonna kick the crap out of you if you prepare something like that!" (Episode 1, referring to the "BLT")

Nyarko: "You really want us to get taken off the air?!"

Mahiro: "Wait a minute. Why'd did you get censored by the broadcast code?"

Mahiro: "Seriously, why is this happening to me?"

Nyarko: "I'm the Chaos that always crawls up to you with an smile, Nyarlathotep!"

ATTENTION PLEASE!! When watching animated shows, please make sure the room is well-lit and do not sit too close to the screen. Also, there's not much movement.

Mahiro: "That was the foreshadowing?!"

Nyarko: "It's not a crime if no one finds out."

Mahiro: "Obviously the last one is of your own making."