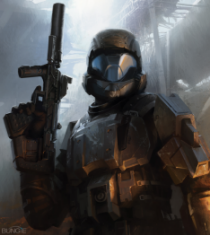 Halo 3: ODST is an expansion of Halo 3. Chronologically ODST is concurrent with certain events of Halo 2. During that game, the Covenant had started a full invasion of Earth and occupied the city of New Mombasa. You take on the role of a rookie Orbital Drop Shock Trooper who is trapped behind enemy lines during a drop and it plays out as a Gaiden Game story.

The gameplay is largely a throwback to Halo: Combat Evolved with the less effective recharging shield, the need of health packs, the ability to only use one weapon at a time and as a result the use of a pistol that is actually useful in its own way (Halo 2 and 3 were criticized in that regard). While gaining good reviews, some players have criticized a relatively short campaign.

The game also included a second disc that was comprised of the Halo 3 multi-player (no campaign) with all of the downloadable maps (including 3 that wouldn't be available otherwise for half a year after ODST's release). In addition, it featured a new multi-player mode called Firefight where you battled endless waves of Covenant coming after you.

Troopers! We are green, and very, very mean!

Tropes used in Halo 3: ODST include:

Retrieved from "https://allthetropes.org/w/index.php?title=Halo_3:_ODST&oldid=1861601"
Categories:
Cookies help us deliver our services. By using our services, you agree to our use of cookies.