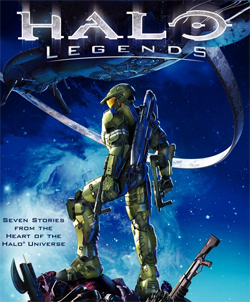 Halo Legends is an anime-styled series of seven short stores set in the Halo universe. What The Animatrix did for the The Matrix films and Batman: Gotham Knight did for The Dark Knight Trilogy, Halo Legends does for the Halo Expanded Universe. It was produced by Microsoft's internal Halo entertainment team, 343 Industries. It is under six production houses, namely Bee Train, Studio BONES, Casio Entertainment, Production I.G, Studio4°C, and Toei Animation.

The stories shown in this movie are:

Tropes used in Halo Legends include:

Don't make a girl a promise if you know you can't keep it.

SPARTAN-1337: No one else would say it, so I will: the fact that I never give up is one of my good points!