Everything About Fiction You Never Wanted to Know.
(Redirected from Hana Yori Dango)
Jump to navigation Jump to search 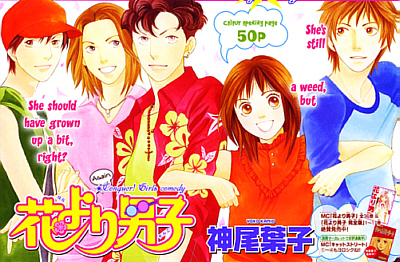 Hana Yori Dango (Western title: Boys Over Flowers) is a Japanese Shojo manga series written by Yoko Kamio. It ran for thirty-six volumes over a period of eleven years. It has enjoyed massive popularity in Japan and Asia. It has been adapted into an anime , three live-action television dramas (one in Taiwan called Meteor Garden, one in Japan, one in South Korea and one in development in Mainland China), an animated movie set in a parallel universe, and a live-action movie.

The story varies a bit from continuity to continuity, but the basics are thus. Plucky Girl Tsukushi Makino is the sole middle class student attending the Fiction 500 prep school Eitoku Academy. The school is presided over by the F4 (short for "Flower Four"), Tsukasa Domyoji, Rui Hanazawa, Sōjirō Nishikado, and Akira Mimasaka, whose parents have paid the administration a massive amount of money to allow their offspring free reign of the school. As a result, they lord themselves over the school and use their influence to get the entire student body to physically assault students for such transgressions as "accidentally squirting lemon juice into our leader's eye." For about a year and a half, Tsukushi tries to preserve her safety by being ignored, but steps in to protect her only friend at school (Shrinking Violet Makiko Endou) after she accidentally offends Tsukasa, the F4's leader. This causes her to be alternately assaulted and ostracized by the entire school, with the exception of Tsukushi's crush Rui (who often steps in and saves her when he's not busy spacing off and Tsukasa(who is more intrigued than outraged). She eventually befriends the F4 and her influence seems to largely put a stop to their bullying ways.

The series gradually changes focus to the Love Dodecahedron surrounding the main characters, and eventually focusing on the main couple of Tsukushi and Tsukasa. The latter half is largely composed of them working around their massive class differences (his parents are Corrupt Corporate Executives, hers are increasingly insolvent) and thwarting the plans of Tsukasa's Evil Matriarch Kaede to separate them.

For the Korean Series adaptation, see Boys Before Flowers.

Tropes used in Boys Over Flowers include:
Retrieved from "https://allthetropes.org/w/index.php?title=Boys_Over_Flowers&oldid=1919590"
Categories:
Cookies help us deliver our services. By using our services, you agree to our use of cookies.