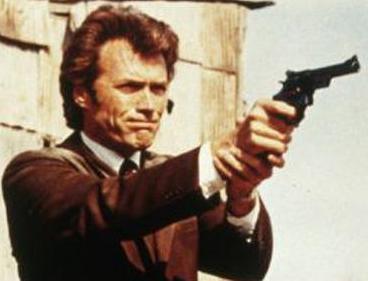 The .44 Magnum. Guaranteed to blow your head clean off.

There are certain rules about guns and who's armed with what. In general, in non-military stories, the protagonist is armed only with their trusty handgun. Essentially, a character who carries a pistol as their primary firearm is showing just how cool he really is; he can take the field with an inferior weapon and win the day. However, pistols can be portrayed as wonder weapons, equal to a rifle in killing power.

To be fair, the handgun does provide certain advantages for many walks of heroic life. It is small, easily concealed, and easily used. Even when better armaments are available and sometimes more advantageous, many heroes still carry a handgun as their primary firearm. Rifles and the like are reserved for supporting characters or the Redshirt Army or Evil Minions to carry.

Actually, as main weapons handguns perform poorly when compared to, say, assault rifles. However, the appeal of handguns appears to trump such trifling tactical concerns - in effect the handgun is the modern sword, preferred by heroes over the more militarily common polearm for roughly the same reasons. If they really want power, they'll either use a shotgun or a Hand Cannon. Or, perhaps, carry two.

Exceptions apply for characters in the military, as rifles and other such military-grade weapons are standard-issue. Even then, such a character is frequently reduced to using his trusty sidearm when facing down the Big Bad, or may carry a pistol if they are an officer or special forces.

However, when it comes to handguns, everyone agrees that Revolvers Are Just Better

Examples of Handguns include: