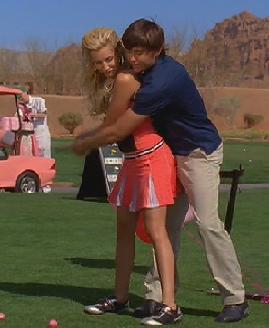 My mommy has a trainer, and every time he comes over, they take a nap.
—Anonymous 6 year-old girl

Alice is helping Bob practice something like a sport or playing a musical instrument. Alice needs to help walk Bob through some motions. So Alice takes his arm or shoulder to put them in the proper position. Why is Bob blushing like crazy? And why does it take him forever to get it right?

A common Ship Tease situation that can be as awkward as it is sweet. Because one character has a secret crush on the other, or because they are two adamant Just Friends, or because they're arch enemies, the necessary physical contact takes on much more significance than intended for one or both. Another situation involves a women having a personal trainer or an instructor in anything who she's instantly attracted to and the actual lessons become foreplay and they end up having sex at the end of the session.

Expect any bystanders to comment, "It's getting a little hot in here." See also Zip Me Up and I Didn't Mean to Turn You On.

No real life examples, please; This is All The Tropes, not Tropes After Dark

Examples of Hands-On Approach include:

"Feel that wood? You won't get that sensation from a power tool."