Hanna Is Not a Boy's Name 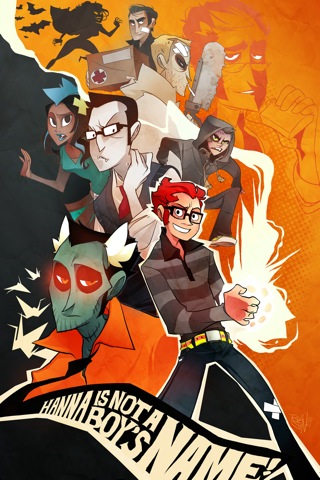 Hanna Is Not a Boy's Name was a "sugarcoated horror"/Urban Fantasy web comic about a wannabe paranormal investigator named Hanna Falk Cross, who is visited at the beginning of the story by the main character, {...}. The two become partners just in time for Conrad Achenleck to complain about a vampire in his flat. Long story short, Conrad gets bitten and they completely fail their first mission, setting the vampire free from a curse of some sort. Some other vampires aren't so pleased about that, starting the main story arc.

Contained zombies, vampires, weird magic, ghosts, werewolves and selkies. It was published between 2009 and 2011.

Has a wild mass guessing page. And a character sheet.

Tropes used in Hanna Is Not a Boy's Name include:
Retrieved from "https://allthetropes.org/w/index.php?title=Hanna_Is_Not_a_Boy%27s_Name&oldid=1927989"
Categories:
Cookies help us deliver our services. By using our services, you agree to our use of cookies.