Everything About Fiction You Never Wanted to Know.
Jump to navigation Jump to search
/wiki/Hansoncreator 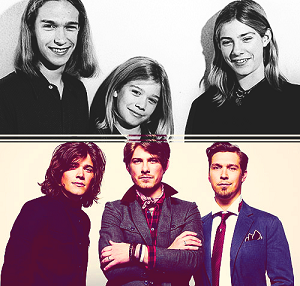 They are All Grown Up

The first music you really fall in love with is more than just music. It’s something that clicks in you beyond the song, it’s a message or image that causes you to jump in and not let go.
—Taylor Hanson

Hanson is a Pop band from The Nineties, made up of Jordan Taylor Hanson, lead vocalist and keyboardist; Clarke Isaac Hanson, the guitarist, and Zachary Walker Hanson, the drummer. They produced their first albums, Boomerang and MMMBop (on which the title track and Hanson's most famous song would first appear), in 1995 and 1996. After playing their song "MMMBop" for a guy at Mercury Records, they eventually released their first well-known album, Middle of Nowhere, in 1997. The upbeat, catchy signature track, "MMMBop", won the hearts of many girls...and male fans who thought they were girls. However, despite many compilation albums, Hanson and "MMMBop" became a distant memory among the general public in a few years.

The trio returned in the 2000s with a new style that was a little Darker and Edgier than the poppy image that made Middle of Nowhere successful. After a set of record company mergers that dissolved their previous label, the trio found themselves signed with Island Def Jam. Conflict and delays in recording their third major album Underneath ended with them departing from the record company and forming their own record label, 3CG. There was a documentary made about the entire thing entitled Strong Enough to Break.

Hanson created Take The Walk in the late 2000s, a charity to help fight poverty and AIDS in Africa. Basically, you walked a mile in no shoes. They also created the album The Walk in 2007. In 2010, they made the album Shout it Out, which is a little more upbeat than their last few albums.