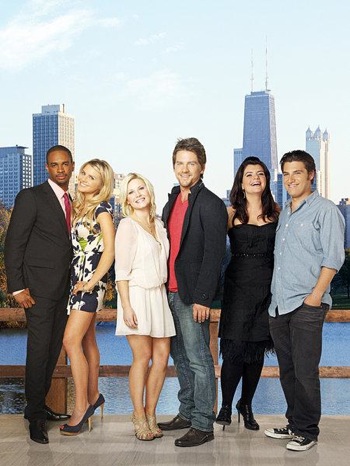 Happy Endings is an ABC sitcom that premiered in April 2011. The series begins when Alex leaves fellow friend and husband-to-be Dave at the altar. This completely traumatizes Dave, and leaves their friends, who were brought together due to Dave and Alex being a couple, lamenting how they will probably never see each other again.

When Alex returns from the honeymoon that she and Dave planned, Dave is understandably ticked off; and now the friends have a problem: having to either disband or pick sides between Dave and Alex.

Fortunately, Alex and Dave decide that what happened was for the better and that it should not be something that should destroy their friendship. However many complications remain down the road for this group of friends. And Hilarity Ensues.

Tropes used in Happy Endings include:
Retrieved from "https://allthetropes.org/w/index.php?title=Happy_Endings&oldid=1636054"
Categories:
Cookies help us deliver our services. By using our services, you agree to our use of cookies.