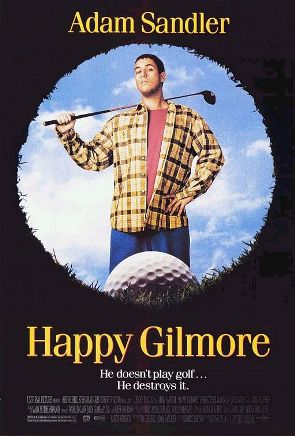 "He doesn't play golf -- he destroys it."
—Tagline

While Caddyshack is widely regarded as the greatest golf movie ever made, this is undoubtedly the second-greatest.

Happy Gilmore is the story of -- well, Happy Gilmore, a die-hard hockey fan who badly wants to make it in the pro leagues. Unfortunately for him, he gets cut at every tryout due to a considerable lack in skill -- a powerful slapshot notwithstanding. Things go from bad to worse when he discovers his grandmother owes over $250,000 in back taxes and is about to lose her home. While her stuff is being repossessed, the two workers challenge Happy to hit golf balls. He does...and much to the workers' (and his own) surprise, discovers he has a 400yd+ drive. After a remark about how he can make lots of money doing that, he decides to give golfing a shot.

Of course, if you talk about this with any casual Adam Sandler fan, they're gonna bring up the fact that he got punched out by Bob Barker.

Still, this is a movie brimming with hilarity from front to back, and regarded as one of Adam Sandler's defining roles.

Tropes used in Happy Gilmore include:

Shooter: Damn you people, this is golf!

Happy: Yeah, I was just looking for the other half of this bottle, and-- oh, here's some! There's some... over there, too.

Happy (to his golf ball, after barely missing a putt): You son of a bitch ball -- why don't you just go home?! That's your home! Are you too good for your home?! Answer me!

Mr. Larson: That's two thus far, Shooter.
Shooter McGavin: Oh, you can count. Good for you.
Mr. Larson: And you can count...on me, waiting for you in the parking lot!
(crowd "oooo"s in surprise while Shooter runs away, followed by someone in the crowd mockingly calling "Run Shooter!")

Doctor: Well, you're a little banged up but no serious injuries. Just keep off your feet for a few days.
Happy: To Hell with that, I gotta finish up.
Doctor: Fine! Do whatever you like. What would I know, I'm just a Doctor.

Shooter: You, beat me, at golf? Yeah right, and Grizzly Adams had a beard.
Trevino: (interjecting) Grizzly Adams did have a beard.