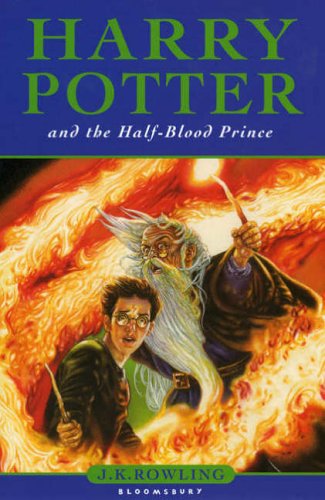 "Apparently I underestimated you, Potter. Who would have thought you knew such Dark Magic?"
—Severus Snape

In the sixth Harry Potter book, published in 2005, the Ministry has finally accepted that Voldemort is back, but that's not really making the situation any better. With everyone terrified, obviously unjustifiable arrests, and misinformation still being printed, just in the other way, and events play out to show that the Ministry can't really stop Voldemort in its current form.

But while those events linger over the plot, the action stays fully grounded at Hogwarts. Harry learns more about Voldemort's Backstory, becomes increasingly suspicious of Snape's loyalty and discovers an old potions textbook annotated with powerful spells and useful notes from its previous owner who identifies himself only as "The Half Blood Prince". Draco Malfoy joins the Death Eaters only to discover that Evil Is Not a Toy; and wacky romantic hijinks ensue for everyone.

As Word of God has noted, Half-Blood Prince is where the serialization of Harry Potter hit its max. Where all five of the previous novels ended the main plot, Half-Blood Prince's ending builds up to an emotional release but simply prepares the reader for Deathly Hallows to start up at a much faster pace.

Tropes exclusive to this book or at least especially prominent:

Hermione: "You said to us once before that there was time to turn back if we wanted to. We've had time, haven't we?"

Slughorn: I once had a fish... Francis. He was very dear to me. One afternoon, I came downstairs and... it vanished. Poof.
Harry: Poof.
Slughorn: It was a student who gave me Francis. One day I came down to my office, and there was a bowl with only a few inches of clear water in it. And there was a flower petal floating on the water. Before my eyes it started to sink, and just before it hit the bottom, it transformed into a wee fish. It was a beautiful piece of magic, wondrous to behold. The flower petal was from a lily. The day Francis disappeared was the day your mother... (starts crying)

Harry Potter: But, sir, it all comes to the same thing, doesn't it? I've got to try and kill him, or --
Albus Dumbledore: Got to? Of course you've got to! But not because of the prophecy! Because you, yourself, will never rest until you've tried! We both know it! Imagine, please, just for a moment, that you had never heard the prophecy! How would you feel about Voldemort now? Think!
Harry: I'd want him finished. And I'd want to do it.