Everything About Fiction You Never Wanted to Know.
< Harry Potter(Redirected from Harry Potter and The Order of The Phoenix)
Jump to navigation Jump to search 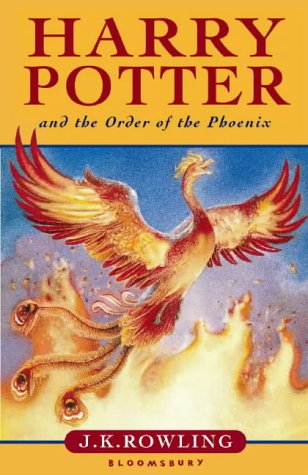 The fifth book in the Harry Potter series. Published in 2003. Voldemort's back, but the Ministry of Magic is in denial, so they decide the best solution is to start a Government Conspiracy and cover up all the evidence. Then they send one of their own, Dolores Umbridge, to Hogwarts to take over. At the end an even more major supporting character is Killed Off for Real, officially signaling that from now on Anyone Can Die.

Order Of The Phoenix was in the works longer than any other book in the series besides the first one. In the three-year gap between Goblet and Phoenix, speculation flew, Fan Fics such as The Draco Trilogy reigned, the franchise took off as a global entertainment brand (including the film adaptations for the first two books released)... and expectations soared. After all, Goblet Of Fire had ended with Voldemort finally regaining his powers. Surely the series would become way more awesome with Voldemort returned to his former glory.

Character Development for Ginny and Neville also contribute to the polarization. Harry also stops being a Knight in Shining Armor, as his moral flaws are brought to light.

Tropes exclusive to this book or at least especially prominent:
Retrieved from "https://allthetropes.org/w/index.php?title=Harry_Potter/Harry_Potter_and_The_Order_of_The_Phoenix&oldid=1678793"
Categories: