Everything About Fiction You Never Wanted to Know.
(Redirected from Harry S Truman)
Jump to navigation Jump to search 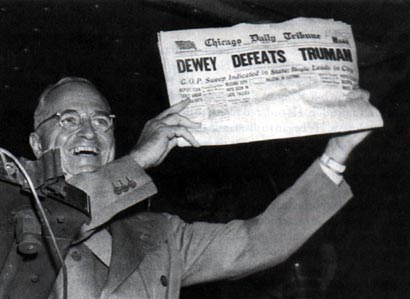 I'm From Missouri
—Other side of plaque on Truman's desk

Finding himself President after the sudden death of Franklin D. Roosevelt, Harry S. Truman was President until 1953. As such, it was Truman who gave the order to drop the atomic bombs on Hiroshima and Nagasaki. Truman did not have the "need to know" about the Manhattan Project until FDR died (hell, Josef Stalin and his spies knew about the Manhattan Project before Truman did). Thus he took the decision to use them in a bit of an information vacuum, something historians have subsequently either downplayed or over-emphasized. He also desegregated the US military in 1948, because of his disgust over the way African-American war veterans were treated; the fact that it also saved some tax dollars getting rid of that ridiculous redundancy helped sell it too.

His middle name is actually just an "S" - his parents wanted to please both of his grandfathers that way, who were named "Solomon" and "Shippe" respectively. It was a tradition among Scots-Irish immigrants in America.

He's featured in a famous article, where the Chicago Tribune famously boasted, based on inaccurate opinion polling, "Dewey Defeats Truman" (he didn't). If you look at the example picture, you can see how happy he is. This can be considered his Crowning Moment of Awesome, especially when one considers that he had to contend with two third-party splinter candidacies during his campaign, one from Henry Wallace (a leftist who opposed Truman's anti-Communism) and another from Strom Thurmond (a Southern segregationist who opposed Truman's support for civil rights). His later presidency, however, was a slew of unpopular, nuanced decisions and a slide in the polls.

Truman's period was very much one domestic crisis after another. He sent troops into The Korean War and when this became a stalemate, he became seriously unpopular, especially after sacking General MacArthur. (Despite MacArthur being partly responsible for said stalemate and wanting to directly attack China with thermonuclear weapons.) He ended up going as low as 22% in approval ratings, the lowest of all time in the Gallup poll.

Although he wasn't term-limited by the 22nd Amendment passed during his presidency -- he was explicitly excluded -- he decided that he couldn't stand the heat any longer and got out of the kitchen (an expression popularized by Truman), announcing he would not run again in 1952. Losing the New Hampshire Primary helped. Estes Kefauver--a liberal Senator from Tennessee[1]--won most of the primaries, but the party bosses (who actually chose the delegates then) went for Adlai Stevenson, who lost to Dwight D. Eisenhower in an Electoral College landslide. (Of course, pretty much anyone would have lost in landslide to General Eisenhower.)

Truman died in 1972 from pneumonia. Since his departure, Truman has enjoyed a rise in popularity and is rated highly by many historians. In particular, his decision to fire MacArthur, while deeply unpopular at the time, is now commonly viewed as a smart move that prevented the Korean War from escalating into World War III (MacArthur wanted to invade and bomb Red China, which is why he was fired), though there are plenty who still say that focus on simply holding the North, instead defeating it is the real reason the war was ultimately a stalemate. He has a carrier named after him, a bit ironic, since Truman actually tried to limit the expansion of the US Navy's aircraft carrier program during his tenure. Truman has also become a kind of political trope in and of himself, as he is frequently cited by politicians down in the polls as a reason for supporters to keep the faith. As a general rule, when a politician starts citing Harry Truman, it's a bad sign for his electoral prospects.

He popularized the expression "The Buck Stops Here" (meaning that he'd take full responsibility for all actions of the Executive Branch.).

[interrogating a captured Zoidberg] If you come in peace, surrender or be destroyed! If you come to make war, we surrender!