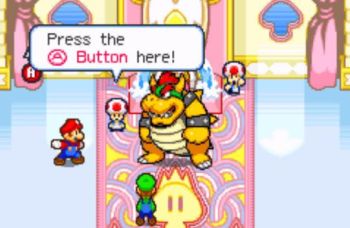 Giving a tutorial to a player in a game is not particularly easy to do well. Even many better-done Justified Tutorials have to resort to Painting the Fourth Wall via on-screen text or the like to get across the fact that you must push button X to do action Y.

Then you have game tutorials where both the Fourth Wall and Willing Suspension of Disbelief are jarringly thrown out the window. When the instructions for the button presses come right out of the character's mouths, it's clear that He Knows About Timed Hits.

Obviously, given the fantastical settings of most games, the characters in it should not have any way of knowing that they are in a game, or even what a video game is in many cases. Because of this, even the game designers are prone to hang a lampshade on it.

Examples of He Knows About Timed Hits include:

Retrieved from "https://allthetropes.org/w/index.php?title=He_Knows_About_Timed_Hits&oldid=1966977"
Categories:
Cookies help us deliver our services. By using our services, you agree to our use of cookies.