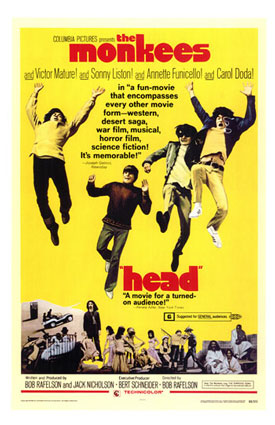 Head is a film released in 1968, starring TV rock group The Monkees, and distributed by Columbia Pictures. It was written and produced by Bob Rafelson and Jack Nicholson, and directed by Rafelson.

Head begins at the dedication of a bridge, the Monkees suddenly interrupting the ceremony by running through the assembled officials, to the sound of various horns and sirens. The rest of the film has no overriding plot. There are several short vignettes that consist of a conflict and resolution, but the film is essentially plotless, a seemingly stream of consciousness stringing-together of musical numbers, satire of various film genres, elements of psychedelia, and references to topical issues such as The Vietnam War.

It's so weird, three That Guy With The Glasses members are necessary for a review.

Tropes used in Head include:
Retrieved from "https://allthetropes.org/w/index.php?title=Head&oldid=1636186"
Categories: