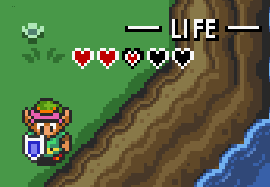 A common bit of widely understood symbolism in Video Games: a heart is used to represent someone's health or life. The Life Meter or lives counter may be made of hearts, and health-related pickups may be in the shape of hearts as well (see Heart Container).

The reason the heart specifically is used for this trope is because of the positive connotations the heart has picked up over the millennia: "lifeblood", love, as well as it being considered the most important organ by the medical community for the longest time (and it's still considered the second most important organ behind the brain, but brains are rather squicky and have different connotations entirely, mainly intellectual).

Examples of Hearts Are Health include:
Retrieved from "https://allthetropes.org/w/index.php?title=Hearts_Are_Health&oldid=1549685"
Categories: