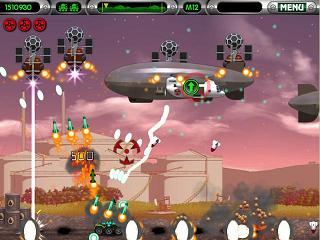 My Tank Is Fight!

Heavy Weapon is a side-scrolling Shoot'Em Up developed by Pop Cap Games and released in 2005. An Updated Rerelease was ported to the Xbox 360 in 2007.

A Red Star invasion of the world destroys nearly all the Allied troops. As the Allies' final hope, the player takes the role of the commander of an Atomic Tank to repel the invaders back into the main headquarters of Red Star.

Not to be confused with the Heavy Weapons Guy. He'd likely enjoy this game, though.

Tropes used in Heavy Weapon include:

"Take that, you commie pigs!"