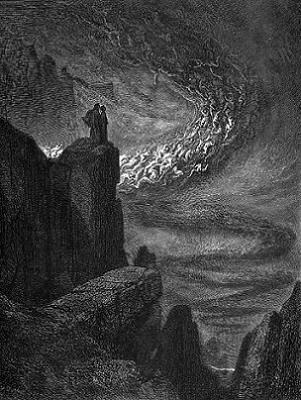 "Once upon a time, there was a place that wasn't a place. It had many names: Avernus, Gehenna, Tartarus, Hades, Abaddon, Sheol... it was an inferno of pain and flame and ice, where every nightmare had come true long since. We'll call it Hell."
—Neil Gaiman

Hell is many things for many religions and philosophies, but a few pop-cultural constants have emerged over time. Hell used to be considered a fiery, literally subterranean underworld ruled by a horned devil and, while this interpretation still lives on in cartoons and parodies, the trend for more recent treatments almost always involves placing Hell in Another Dimension. While the exact details of Hell's environment vary depending on the source, it's always a place of suffering, meant to be inhospitable to human standards of comfort. More often than not, fire and brimstone imagery at least plays a part in the setting, though the image of Hell as a ruined, twisted version of the real world has lately become popular as well. Often Dying Dream stories in the horror genre end with the revelation that the character's actually in an Ironic Hell.

The inhabitants of Hell are usually divided between human prisoners and their demonic captors, though occasionally the demons are simply high-profile prisoners themselves, and sometimes they're the only inhabitants: modern fantasy stories and video games in particular tend to use Hell as a form of Sealed Evil in a Can, while downplaying or outright rejecting the idea of it as a human afterlife. If there are human captives in Hell, they'll typically be functionally immortal, at least while they're in Hell: after all, eternal torment wouldn't be eternal if it could really kill you. Of course, if the people damned to Hell don't have any bodies, then this might not be an issue... and it might make escaping from Hell that much easier for them. But just as often, Hell is portrayed as single-occupant only, and the damned all have their own separate versions of Hell, disconnected from each other.

In modern horror and fantasy, Hell's often given portals that can send living people back and forth between the two worlds. A portal usually serves as the vehicle for a living hero to stage a rescue of a loved one from Hell, or for someone to break out out on their own. The more recent idea of Hell as a parallel reality, though, gives such gateways a more mystical aspect: whereas classical ideas used famous caves as tunnels into the underworld, modern hellgates are usually invisible until opened by magic. Sometimes the magic itself is the gateway, and can be opened from anywhere, usually via a Tome of Eldritch Lore or an Artifact of Doom.

The theological roots of Hell, and the modern pop-cultural image of it, come from a variety of sources, from Christian beliefs to Greek and Egyptian mythology to medieval literature. In more recent times, Asian conceptions of the afterlife, particularly the Chinese and Japanese ideas of Hell, have attained some prominence in the West, particularly through video games and anime. The idea of a moral dichotomy in the afterlife, with different fates reserved for the virtuous and the wicked, goes back to Egyptian Mythology. Making Heaven and Hell entirely separate places is a relatively recent idea from Judeo-Christianity. Many other ancient religions gave the same bland afterlife to everyone who died, save for those lucky few favored by the Powers That Be.

Trying to separate the reality of Hell from its theme park version is a hopeless cause. Not only is the reality of Hell debated, but what's realistic and what's not often depends on who's being asked. Many evangelical Christians believe that Hell is a literal, lake of fire filled with evil spirits. More liberal theologians often take the position that Hell is the willful separation of the soul from the light of God, and that any suffering beyond that is self-inflicted. Perhaps for this reason, many serious stories about Hell that are set in the "real world" won't even try to directly depict Hell, and rely more on what the characters who've been there have to say about it. Sometimes this lack of an onscreen Hell is explained by saying that seeing it would drive a person mad.

Stories that don't necessarily want to deal with the religious angle, but still want to use the basic idea of Hell for dramatic purposes, might use a thinly disguised "dimension of pain and suffering" instead. If it's a story with some science fiction elements, this'll often take the form of Hyperspace Is a Scary Place.

See Fire and Brimstone Hell, Ironic Hell, Bloody Bowels of Hell, Circles of Hell, Hellevator, Self-Inflicted Hell, To Hell and Back, Planet Heck, Like a Badass Out of Hell, The Legions of Hell.

For Hells that aren't so bad, see A Hell of a Time. For gloomy and/or subterranean afterlives that have nothing to do with wickedness or eternal punishment, see The Underworld.

Examples of Hell include:

Crowley: "The problem with the old way was, a lot of the people who came here were masochists anyway. A lot of 'thank you sir, may I have some more?' But this is torture."