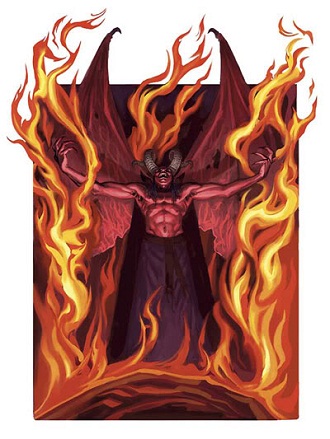 Well, here's hoping that fire is for barbeque.

Want to burn asbestos but haven't got the time? Need to Kill It with Fire but regular fire isn't enough?

Fear not! For here at Trope Co, we have the ultimate form of fire, direct from the Fire and Brimstone Hell! And it's available in all standard designer colors! (Blue, green, deep red, and black are our hottest sellers!)

The way it's supposed to be better versus regular fire is sometimes explained, sometimes not, but rest assured that if it's hellfire, it's stronger! Oh, it's probably Black Magic, but c'mon: it's called Hellfire. It's not like this stuff is powered by the adorableness of kittens.

The point is, hellfire is not physical in origin, and doesn't have to play by the same rules as normal fire. Ignition without a source of oxygen? Sure! Scorching things that are supposed to be fireproof or made of fire? You bet! Notable when it comes from a story without any references to Christianity.

Not to be confused with the Hellfire laser-guided missile, nor the expansion to the original Diablo, nor the Toaplan shmup. Or the Villain Song.

Examples of Hellfire include:

Garganon the Ancient Red Dragon: You burned me!?