Everything About Fiction You Never Wanted to Know.
(Redirected from Herbie Fully Loaded)
Jump to navigation Jump to search 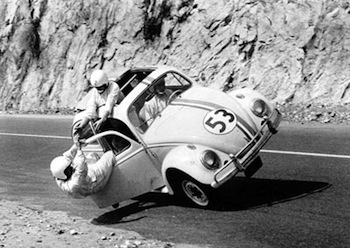 A series of Disney live-action films (the first in the series was one of the last movies personally overseen by Walt Disney) concerning the adventures of Sentient Vehicle Herbie, a '63 Volkswagen Beetle with a mind of its own.

Tropes used in The Love Bug include:

Peter Thorndyke: What part of Ireland did you say your mother came from?
Tennessee Steinmetz: Coney Ireland. [starts laughing]

Carole: Help, I'm a prisoner! I can't get out!
Hippy: We all prisoners, chickee-baby. We all locked in.