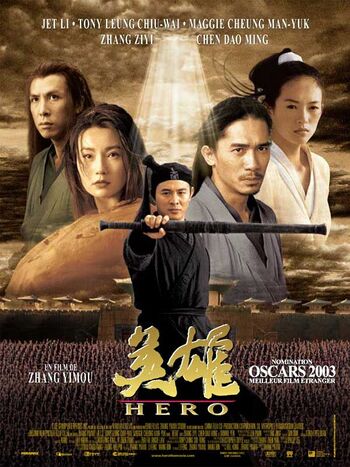 This is about the 2002 Chinese movie. For the 1996 movie released in America as Hero, see Accidental Hero. For other uses of "hero", see Hero.

Hero is a Wuxia film directed by Zhang Yimou and released in 2002. Starring Jet Li, Maggie Cheung, Zhang Ziyi, Tony Leung and Donnie Yen, it is set in the troubled transitional period between the Warring Kingdoms and the Qin Dynasty, when the ruthlessly despotic King of Qin was in the process of annexing the other kingdoms of China and incorporating them wholesale into his own.

Jet Li plays Wu Ming ("Nameless"), ostensibly a minor official who claims to have vanquished three assassins out to kill the King (Broken Sword, Long Sky and Flying Snow) before he has a chance to declare himself Emperor. As he tells his story to the terminally paranoid King, things turn out not to be as they seem.

The movie generated political controversy, as the ending was interpreted by some as a justification of despotic rule, and as such an endorsement of the current Chinese authoritarian regime.

Tropes used in Hero (film) include:

"In any war there are heroes on both sides..."