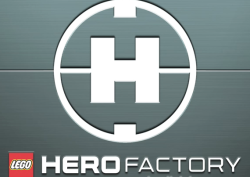 LEGO's successor to Bionicle, following the end of its toyline.

Hero Factory revolves around the construction of robotic heroes in order to protect the similarly robotic populace. Each Hero is unique, with their own distinct personalities and equipment. Our story takes place in Makuhero City, located on a terraformed asteroid. At the heart of Makuhero City is the towering Hero Factory, where new Heroes are constructed in the dozens and equipped with the tools they need for the latest job, whether it be fighting fires or bringing in villains.

Like Bionicle, Hero Factory has a more detailed story told in various media. So far there's an online comic and animated TV miniseries/DirectToVideo projects, Rise Of The Rookies, Ordeal of Fire, Savage Planet, and Breakout.

Our heroes are the Factory's elite Alpha Team:

Together, they fight against the many evil villains of the universe:

Tropes used in Hero Factory include: