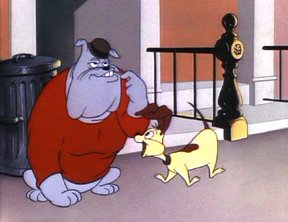 "Spike's my hero, because he's so big and strong!"

The geeky comic relief character who worships the hero and whose primary purpose is to stand around and marvel at every thing the hero does, explaining exactly why it should be so impossible. The Hero Worshipper is usually the one who explains the plot to a less intelligent hero. He rarely has much power of his own, if any, and sometimes is an even bigger This Loser Is You character than the hero.

Often works as a stand-in for the audience, sometimes in the way of a American sidekick - but with a few notable differences.

May also be a Combat Commentator or Mr. Exposition.

Examples of Hero Worshipper include:

Ragueneau (following him): Bravo! I saw...
Cyrano: Well, what saw you, then?
Ragueneau: Your combat!...
Cyrano: Which?
Ragueneau: That in the Burgundy Hotel, 'faith!
Cyrano (contemptuously): Ah!. . .the duel!
Ragueneau (admiringly): Ay! the duel in verse!. . .
Lise: He can talk of naught else!
Cyrano: Well! Good! let be!
Ragueneau (making passes with a spit that he catches up): 'At the envoi's end, I touch!. . .At the envoi's end, I touch!'. . .'Tis
fine, fine!
(With increasing enthusiasm): 'At the envoi's end—'
Cyrano: What hour is it now, Ragueneau?
Ragueneau (stopping short in the act of thrusting to look at the clock): Five minutes after six!. . .'I touch!'
(He straightens himself): ...Oh! to write a ballade!