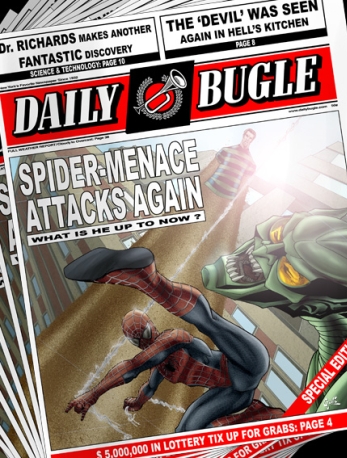 "What is he up to now?" How about saving your ungrateful lives![1]

Being a Superhero isn't all it's cracked up to be. The heroes' lives and those of their loved ones are constantly in danger from their archnemeses—and sometimes from their own powers, too. Sometimes someone else takes credit for their heroic efforts. But perhaps the most hurtful and confusing drawback comes when the people they've sworn to protect hate their guts.

This could arise for any number of reasons:

But whatever the reason, public sentiment is against these heroes, and there's usually nothing they can do about it. Sorry - you can't please everyone.

Usually serves as the grass-roots support for a Super Registration Act. Can be a reason that Sued for Superheroics. Especially ironic when it happens to the Slave to PR. The permanent version of the Untrusting Community. The inverse, where the hero's problems are evident only to intimates, is No Hero to His Valet, while the complete opposite - a bad guy that people like - is Villain with Good Publicity. Please observe the Rule of Cautious Editing Judgement rule when adding Real Life examples, as one person's hero is often another person's villain, and vice versa, especially in politics.

Examples of Hero with Bad Publicity include:

Retrieved from "https://allthetropes.org/w/index.php?title=Hero_with_Bad_Publicity&oldid=1920513"
Categories:
Cookies help us deliver our services. By using our services, you agree to our use of cookies.