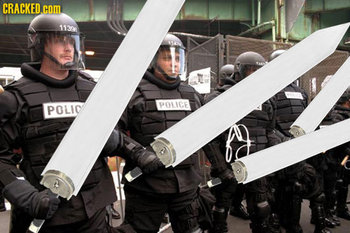 Even urban heroes prefer them.

In an RPG, the main character always uses a sword, or at least has the option of using a sword. Even if the character has no training. Even if there are more efficient/advanced weapons. Always.

And it's even rarer for the main character to be able to use both swords and non-sword weapons, but not start with a sword. Rarer still is the hero who starts with a sword and then moves on to something else.

Given that a sword is a fairly useful melee weapon with a wide variety of uses (and historically, pretty much everyone who could get a sword would have one) this makes some sense. Still, given modern society typically prefers ranged weapons, it looks out of place. This can lead to improbable weapons that take the coolness of a sword and combine it with the effectiveness of a weapon modern to the work's universe, such as "gunswords." This is more of a Justified Trope than one might think, since at the very least, bayonets are still used, both for their practical uses in close combat when bullets run out, but also because they are able to puncture body armor that bullets can't (according to a bayonet article, a prototype was able to pierce a punching bag covered with aircraft aluminium and a ballistic vest).

The main antagonist often uses a sword as well, at least before he transcends his mortal shell.

Often this can be attributed to the knowledge that Katanas Are Just Better.

We will kindly assume they are not compensating for anything.

For whatever reason, dissidents seem to cluster around firearms (and the modern sword, Handguns, in particular) and fighting barehanded. In fact, this trope is so widespread that it's probably more efficient to list examples that play with this.

Examples of Heroes Prefer Swords include:

Retrieved from "https://allthetropes.org/w/index.php?title=Heroes_Prefer_Swords&oldid=1835113"
Categories:
Cookies help us deliver our services. By using our services, you agree to our use of cookies.