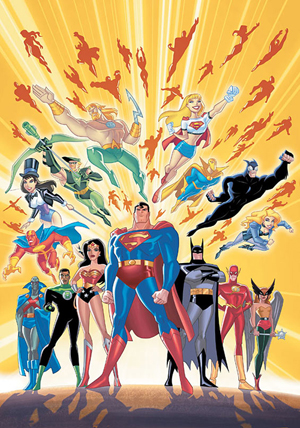 A Story Arc or season which features an expansion of the general cast, such as other groups of protagonists working in other locations for similar goals. Allows a new pool of characters for writers to pick from rather than constantly having to make new ones, so stories can occasionally focus on them and give the main folks a break. Often, characters from one-shot episodes are brought back as part of the new group.

Nothing to do with the Palladium Books RPG of the same name. Even though that first turned up twenty years before Justice League Unlimited.

Examples of Heroes Unlimited include:

Retrieved from "https://allthetropes.org/w/index.php?title=Heroes_Unlimited&oldid=1919498"
Categories:
Cookies help us deliver our services. By using our services, you agree to our use of cookies.