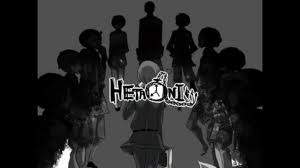 Don't worry guys, it's not like anything bad is going to happen to us! ...Right?

Heta Oni is a fanmade Axis Powers Hetalia game told in RPG format, based on the horror game Ao Oni.

It begins where Italy hears of a haunted house, tells America about it and they bring the rest of the Axis and Allies, along with Prussia and Canada, to investigate. As it turned out, a monster resembling America's alien friend Tony begins to hunt them and they have to do what they can to stay alive.

Translations for the script and the subbed videos for the game could be found here and here. A playable English version can be found here. [dead link]

Tropes used in Heta Oni include:

My apologies to those who like horror, but I made this game so that it wouldn't be very scary. Thank you for understanding.

(After Germany comes out of the armoured closet fortress he had been hiding in. With a whip. And Italy is missing).
Japan: [to Germany] Do you actually like tight spaces?
Germany: Well, you could say that I'm...used to them.