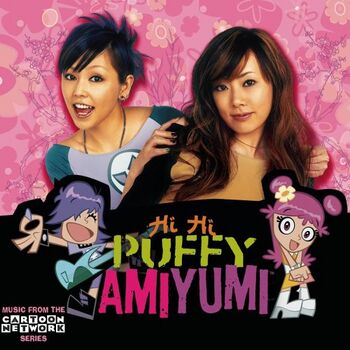 A short-lived Cartoon Network original series based on the Real Life J-Pop group PUFFY (called Puffy AmiYumi in the States to avoid offending a certain trigger-happy rapper) previously known in America for providing the theme for Teen Titans.

Produced for television by Sam Register with the help of former Jellyfish member Andy Sturmer, who had previously worked with the real duo. Animation was done with Flash by Renegade Animation in California, making it the only show at the time to have been fully animated in the US (thus making their choice of characters quite ironic), with characters designed by famed Canadian artist Lynne Naylor which got the show nominated for the coveted Annie Award. The series follows the two best friends/musicians and their manager Kaz as they travel around the on their world tour with a number of nutty adventures along the way.

Ami: "Thank Goodness we're back in Japan, we can catch up on all the manga and anime we've missed."
Yumi: "Tell me about it. American cartoons are terrible! ... Oops. Just kidding.

"Another chase scene? I thought we were a rock band."