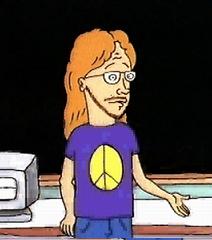 Let's get in touch with our inner-granola, m'kay?

May or may not be a good teacher, but never a good disciplinarian. Often let students call them by their first name ("Mr. Hippie Teacher is my father; you can call me Rod"). Definitely Truth in Television; many people had art teachers like this. While in fiction they can teach any subject, art teachers, guidance counselors and other teachers of "soft" or "creative" subjects tend to predominate with hard sciences being less common unless crossed with Absent-Minded Professor.

Contrast with the Sadist Teacher. Compare Misplaced Kindergarten Teacher and Psychologist Teacher, and Hippie Parents for the parent variant.

Examples of Hippie Teacher include: