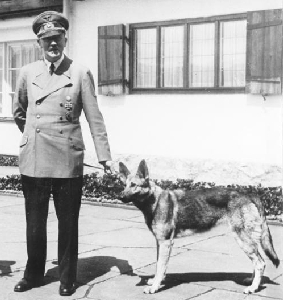 A logical fallacy that assumes that anything done or liked by a bad person must be bad itself.

The premise seems to be that bad people must have a way to tell if something is evil. Either that, or bad people are repulsed by anything that isn't at least as evil as they are. Whatever the reason, bad people magically will only associate with things that are bad. Therefore people claim a thing is bad because bad people associate with it.

This is a concept called The Association Fallacy, which often overlaps with Godwin's Law, due to how often Hitler is used for this (also known as Reductio ad Hitlerum).

After all, Hitler has gained the reputation for being the very embodiment of darkest evil, who oozed "pure liquid malevolence" right out of his pores. So, he supposedly would only do/like/own things that are as evil as him. Things like wearing clothes, eating, taking a walk, and breathing. Hitler did those things, but that doesn't make them bad. Hitler is not a reason things are bad.

We don't think mass murder is bad because Hitler, Stalin, or other bad people did them. We think those people are bad because they committed mass murder. In other words, this trope is backwards. A thing being bad stands on its own as bad. It would be like...

This is also one of the reasons why we are often loath to admit that a person who we generally always disagree with may actually be right for once. Someone intimidated by this "argument" may invoke No True Scotsman as a "rebuttal".

Compare Abomination Accusation Attack, the Chewbacca Defense and Godwin's Law. Sub-Trope of So Was X and Anti-Advice. Compare also to Real Men Hate Sugar, in which people come to hate something normally considered pleasant due to cultural/gender expectations of what is considered "mature." Usually occurs when people take Not So Different to absurd levels.

Please note that this page is for examples where X is claimed to be bad due to being done, eaten, read, watched or whatever by demonstrably bad people. It's not for cases where the meaning is more "Look, just because he/she/it does/eats/reads/watches X, doesn't mean he/she/it is a good person.". It's the difference between the fallacious argument "Hitler ate sugar, therefore sugar is bad" and the valid argument "Even Hitler ate sugar. Eating sugar does not automatically make you nice".

Opposite of What Would X Do?.

Examples of Hitler Ate Sugar include:

Retrieved from "https://allthetropes.org/w/index.php?title=Hitler_Ate_Sugar&oldid=1954533"
Categories:
Cookies help us deliver our services. By using our services, you agree to our use of cookies.