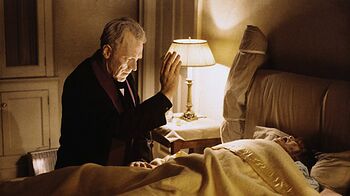 Back in the day, exorcisms used to be all the rage. Any case of psychological trauma was ruled to be Demonic Possession. You know what that means: head spinning, projectile vomit, and speaking in tongues. Pretty soon you have no choice but to haul in an exorcist to cast the demon out of the person in question and send it back to Hell. These affairs are likely to be very dramatic. The exorcist will call upon a deity's name (usually Jesus, but sometimes the Holy Ghost, the Father, or another deity altogether if the religion is not of this world). There will be splashing of holy water, physical and emotional battles of will, fervent chanting in Latin and perhaps some cool special effects. Expect the walls to bleed, the subject of possession to wail and shake in ways no human could imagine, and a demon to emerge either in physical or shadow form. Or so Hollywood would have you believe.

Nowadays, the Catholic church is loath to declare "possession" and perform exorcisms. Real life cases have proved that many cases of Demonic Possession are actually a result of severe neurological or psychological disorders (usually Epilepsy or Schizophrenia). This trope still gets play in Religious Horror and other such genres, but is more likely to be subverted in more serious works.

Related to Demonic Possession. See also The Power of X Compels You!

Examples of Hollywood Exorcism include:

Chris: How do you go about getting an exorcism?
Karras: I beg your pardon? Well, the first thing -- I'd have to get into a time machine and get back to the 16th century... Well, it just doesn't happen any more, Mrs. MacNeil... since we learned about mental illness, paranoia, schizophrenia... Since the day I joined the Jesuits, I've never met one priest who has performed an exorcism. Not one.