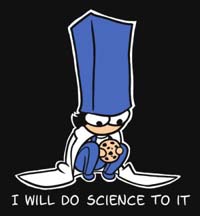 "I'm a filmmaker, not a scientist."
—Roland Emmerich

When it comes to science and history, we can't expect the writers to get all the facts right. Maybe we should be able to expect this, but such expectations will lead to disappointment. To be fair, though, good story will always trump good science.

Hollywood Science is common in Science Fiction, but does not generally apply to cases where the writers step outside the bounds of known science by applying generous quantities of phlebotinum to circumvent the normal rules. Often times, there's a Techno Wizard to help explain how it works.

It's not always a bad thing. See Artistic License.

Types of Hollywood Science include:

As Science Marches On, mistakes can result from discoveries made after the show was written. In these cases, we must forgive the writers, since they had no way of knowing. Thus, I Want My Jetpack and The Great Politics Mess-Up are not really Hollywood Science.

Examples of Hollywood Science include: