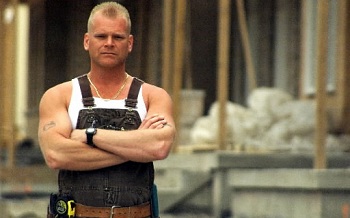 A Canadian home renovation show, Holmes On Homes follows the adventures of contractor Mike Holmes as he rescues homeowners from poor renovations done by third-party contractors. A typical episode will feature Mike Holmes and his coveralls visiting a hapless homeowner, shaking his head at the poor job done by the previous contractor, and then ripping the whole thing out and rebuilding it. This will be followed by hugs and tears and a philosophical speech into the camera about how important it is to do the job right the first time.

Tropes used in Holmes On Homes include:
Retrieved from "https://allthetropes.org/w/index.php?title=Holmes_On_Homes&oldid=1838697"
Categories: