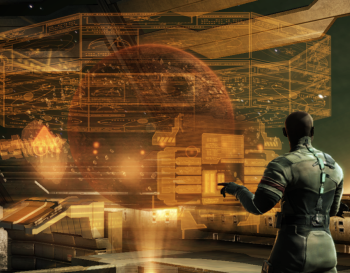 And when the power fails, the whole thing goes dark.

So you're in the future but everything looks pretty much the same. No Crystal Spires and Togas, no jetpacks, not even Space Clothes to make fun of. But just to get the point across that this is the future, walking up to a random soda machine or computer won't reveal any kind of button or screen, instead a Holographic Terminal will pop up right in front of your nose and suspended in midair!

Similar to the Viewer-Friendly Interface, yet very much an Unusual User Interface, the Holographic Terminal is just that, a combination keyboard and screen made of transparent Hard Light that can be used to control computers, machines, or access other Phlebotinum derived devices and abilities. It's somehow solid enough to stop your hand going through it (but presumably not so much to stop a gunshot or sword, but at least it won't explode in your face) and can tell what you're pushing much like a regular touch screen. Whatever it displays is usually visible from "behind" as well (so be sure not to read personal mail in public).

Normally it might appear near an emitter of some kind, maybe even inside actual pieces of transparent plastic or in the empty space between metallic frames. However they're increasingly turning into the SFX equivalent of Internet pop ups: Appearing without the need for an emitter or any kind of prompting by The Smart Guy who'll use it. For much the same reason they're more common in VR environments and themed worlds.

If the situation calls for tension and drama, expect them to appear in a semi circle around a character displaying various important looking bars and graphs, the techie in question will usually spout some Techno Babble while randomly typing and "flipping switches" on different terminals. Basically the futuristic, floating, glowy equivalent of an officious clipboard and pen.

If they look especially complex, it evokes a sci-fi version of Instant Runes, and is usually included as a CG effect added in later. For extra oomph, it can be paired with Matrix Raining Code either in the terminal or around the character. To make it seem even more aesthetically pleasing, may take the form of a Design Student's Orgasm.

It doesn't yet float, but the transparent screen part could be Truth in Television in the near future. See here. Also, if Enhanced Reality goggles ever get here, readout menus would probably appear to the user this way.

Examples of Holographic Terminal include:

Retrieved from "https://allthetropes.org/w/index.php?title=Holographic_Terminal&oldid=1858484"
Categories:
Cookies help us deliver our services. By using our services, you agree to our use of cookies.