Hols: Prince of the Sun 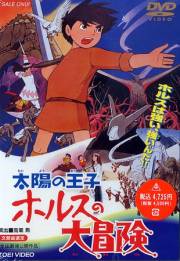 Hols: Prince of the Sun (Taiyou no Ouji Horusu no Daibouken; also known as Horus: Prince of the Sun, The Little Norse Prince, and Little Norse Prince Valiant) is a 1968 anime film. It is most notable for being an early work of Studio Ghibli's most famous talents Isao Takahata (who directed) and Hayao Miyazaki (who did key animation and contributed a lot of ideas to the movie) from back when they worked at Toei Animation.

The story goes like this: In an area reminiscent of ancient Scandinavia, a young boy named Hols pulls a huge sword, the Sword of the Sun, out of the shoulder of a giant "rock golem" named Mogue (sometimes translated as Maug or Rockoar), who promises to declare the boy Prince of the Sun if he can reforge the sword.

Hols returns home to find out that his ill father is dying. Upon his deathbead, the old man tells Hols of their former hometown, which was destroyed by an evil sorcerer named Grunwald, and begs Hols to go find "[his] people". With his bear companion Coro by his side, Hols sets off to find other humans. Along the way, Grunwald captures him and offers to make Hols his brother, an offer which Hols refuses. After surviving being tossed off a cliff by Grunwald, Hols is taken in by a nearby village.

Throughout the rest of the film, Hols defends the village from Grunwald's forces, and befriends a beautiful young girl named Hilda, who is actually Grunwald's "sister", and is seriously conflicted about her part in his evil plans. Eventually, Hilda must decide whose side she's on, while Hols tries to figure out how to reforge the Sword of the Sun and defeat Grunwald once and for all.

The English version was produced by Fred Ladd (of Astro Boy and Gigantor fame), and was syndicated by American International Television in the early 70s as a TV movie. This film is fairly obscure in many parts, especially many Western countries. In fact, the biggest exposure it had in the West was probably when it appeared on TBS in the 1980s, only for it never to air in the U.S. again afterwards. So why is it worth mentioning? Well, for one thing, it was a massive influence on modern anime, including the later works of Miyazaki himself. Second, many people who've seen it agree that it's a damn good movie, with a compelling story and better-than-average animation (well, by Sixties anime standards, anyway). If you're a fan of anime (or at least the works of Studio Ghibli) and you somehow find a copy of this movie, you should definitely watch it, if only to get a look at the early work of two of the medium's greatest talents.

Now can be found on Hulu

Tropes used in Hols: Prince of the Sun include:
Retrieved from "https://allthetropes.org/w/index.php?title=Hols:_Prince_of_the_Sun&oldid=1430647"
Categories: