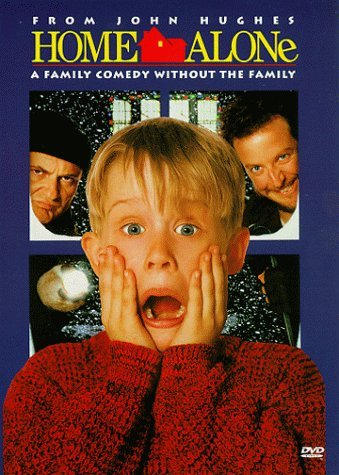 Kevin McCallister (Macaulay Culkin) is an eight-year-old boy from an affluent suburb of Chicago.

During the holidays, his extended family comes into his house with his already large immediate family to prepare for their vacation to France (where some more relatives of theirs are temporarily living). Of course, Kevin causes trouble during dinner, pushing his oldest brother, Buzz, in anger for eating his cheese pizza. As a punishment, Kevin is forced up into the attic where he was intended to sleep with his bed-wetting cousin, Fuller.

Before he goes up into the attic, however, he tells his mother that he never wants to see her or anyone else in the family again. The next day, the family oversleeps due to a power outage, and they hurry to the airport on the way to France.

Kevin, however, was mistakenly left at home, the family having confused him with a snooping neighbor during a head count. He delights in his new freedom, eating junk food and watching a gangster movie. However, he soon discovers that a pair of burglars, named Harry (Joe Pesci) and Marv (Daniel Stern) calling themselves the "Wet Bandits" (after the fact that they flood the houses they rob), are planning to put a hit on his house for its valuables.

Kevin works to prevent them from reaching for his house, using mannequins and cardboard cut-outs mounted on moving toy trains and record players. Along the way, he tries to avoid an elderly neighbor, who is said by Buzz to be a serial killer. Later, however, it turns out that the neighbor is harmless, and has simply lived in recluse due to an argument he had with his son years ago. Kevin convinces him to make up for it by calling his son. Later on, Kevin sets up traps in his house to prevent the burglars from reaching for their valuables, and the extensive climax chronicles the slapstick that ensues.

A beloved family comedy, this 1990 film made Macaulay Culkin a celebrity. This movie is also noteworthy for being written and produced by John Hughes, who had previously worked on teen comedies like The Breakfast Club and Ferris Buellers Day Off, as well as being directed by Chris Columbus, who would later direct Mrs. Doubtfire, Bicentennial Man, and the first two Harry Potter movies, among others.

The movie, being such a success (it was the biggest hit of that year and finished its theatrical run only behind Star Wars and E.T. as the 3rd-highest grossing film in history), inevitably was followed by a few sequels.

The first sequel, Home Alone 2: Lost In New York, was mainly a rehash of the original, only it was set in New York this time. It's generally considered to be respectful to the first movie and was the second biggest box-office hit of 1992.

The second sequel, 1997's Home Alone 3, had a completely different cast and characters (i.e. Kevin was replaced by Alex Pruitt, played by Alex D. Linz), but was otherwise still similar to the first movie. In fact, many of the characters are very much like the characters of the previous movies, with one exception: the stupid burglars, wanted by the local police, were replaced with intelligent spies wanted by the FBI, making the traps less believable. John Hughes still wrote and produced it, but Chris Columbus didn't return to direct - that role was given to Raja Gosnell, editor of the first two films (and future director of Big Momma's House, the live-action Scooby Doo movies, and Beverly Hills Chihuahua). It was not as successful as the original two (it grossed only $79 million, compared to the $476 million of the first film and the $358 million of the second).

The third sequel, Home Alone 4: Taking Back the House is a 2002 Made For TV sequel (but any continuity is absent). It brought back the original characters, but they were again all recast with actors who often looked nothing like the original ones, with the most Egregious examples being Buzz and Megan (originally late teenagers, now somehow preteens) and Marv (now played by French Stewart, who looks nothing like Daniel Stern, and ironically more like Joe Pesci). Much of the family is somehow missing, and Harry has been replaced with Marv's wife, Vera (Missi Pyle). Not even John Hughes had anything to do with this entry; Rod Daniel of Teen Wolf and K-9 fame took over the director's chair for this entry, which would prove to be the last thing he directed. This one was apparently afflicted by severe Executive Meddling, which heavily altered the original script in the hope of launching a TV series off the back of it. Unsurprisingly, nothing of the sort ever materialized.

A fourth sequel, Home Alone: The Holiday Heist, was made as a TV Movie, and was broadcast on ABC on November 25, 2012.

And in 2018, Macaulay Culkin recreated his role as an adult Kevin home alone on Christmas in an advertisement for Google Assistant.

The movies (especially the first two) have become something of a cultural meme in Poland. That's because since the restoration of independence in 1990, each year one of the main TV stations aired Home Alone during Christmas. Today many Poles can't imagine Christmas without 'Kevin'. In the event that no station is planning to show the movie, stations are flooded with mail and petitions until one agrees to broadcast the movie. Eventually, a proverb was coined: "'Kevin' on TV? It must be Christmas coming." It's the Polish equivalent to It's a Wonderful Life in America.

Tropes used in Home Alone include:
Retrieved from "https://allthetropes.org/w/index.php?title=Home_Alone&oldid=1853929"
Categories:
Cookies help us deliver our services. By using our services, you agree to our use of cookies.