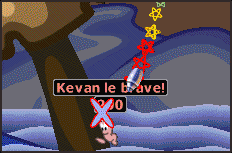 You can run, but you can't hide... actually, you can't run either.

A projectile or attack in interactive media (or a narrative description in non-interactive media) that homes in on its intended target. If you're firing it, it can be an effective means of eliminating targets without putting yourself in harm's way. If an enemy is firing it, you'll need to perform a High-Speed Missile Dodge, whip out a shield, trick its guidance system, Shoot the Bullet, or just outrun it until it loses steam.

A fairly common projectile type in Shmups and Tabletop Games.

Examples of Homing Projectile include: