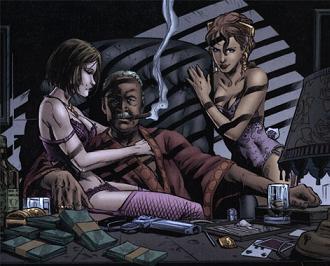 The Good Shepherd sure knows how to party.

A recent[when?] stock way to show that some characters have fallen into decadence is to show them being highly promiscuous and/or doing lots of drugs. Sometimes this can even lead to a character's downfall (if the protagonist), or outright death (if a villain or supporting character).

This became an especially popular thing in The Eighties, because other displays of excessive wealth were considered a good thing (even Fur and Loathing didn't signify decadence all the time). But with awareness of AIDS, and the message of Drugs Are Bad, this trope became a great way to show characters falling from grace.

The term is a common slang for what some politicians and Corrupt Corporate Executives like to have at parties.[1] Wine, women, and song is an older, related term.

Bonus Points are awarded if the cocaine is snorted off of the hooker's arse and / or breasts.

Sex, Drugs and Rock and Roll is a Sub-Trope where this happens to rockers. A Binge Montage is a common way to portray a night like this.

Not to be confused with hookers who blow.

Examples of Hookers and Blow include:

Retrieved from "https://allthetropes.org/w/index.php?title=Hookers_and_Blow&oldid=1850450"
Categories:
Cookies help us deliver our services. By using our services, you agree to our use of cookies.