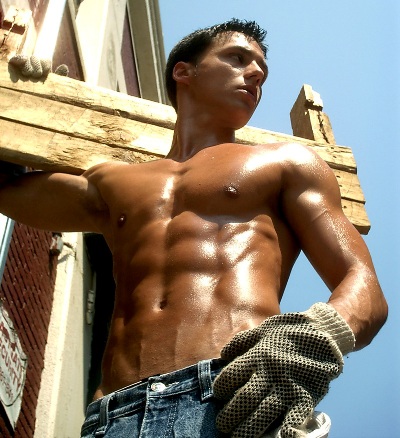 So what if he's probably getting splinters, women also deserve some eye candy.

For all the female fanservice stuff out there, there are male equivalents, too. This is the male version of Wrench Wench.

Builders, plumbers, and gardeners tend to be big, strong men, so why not have them with their shirts off, regardless of health and safety issues? And if the steelworker or blacksmith's hot, sweaty body can be outlined by flickering flames, what is a burn or two?

There is also the possibility of something termed "builder's backside" (plumber's crack?) being seen.

This trope has a rather intense brother, Firemen Are Hot, and two bisexual cousins, Fair Cop and Good-Looking Privates.

Examples of Hot Men At Work include: