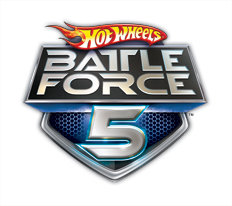 Never mind that there are eight of them, Battle Force Five just sounds cooler. Or they're trying to appeal to a Japanese market.

Hot Wheels Battle Force 5 is an animated series from Nerd Corps, the makers of Dragon Booster, Storm Hawks and League of Super Evil, and airs on Cartoon Network. It is Merchandise-Driven, much like the previous entries in the Hot Wheels: Acceleracers franchise, but this is the first one to be an all-out animated series. While the main character, Vert Wheeler, seems to be the same, no mention is made of the previous two works.

The series is notable for how Troperiffic it is; it seems like Nerd Corps hunted down every Saturday Morning Cartoon trope they could think of, and are systematically working their way down the list. In fact, this show has so many tropes, that we decided to provide a list of tropes in each episode here.