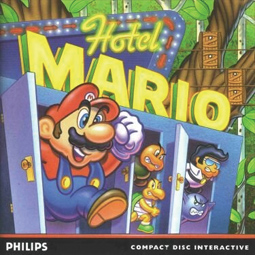 Let's just call it a Licensed Game and never talk about it again.

One of four Philips CD-i games with Nintendo characters resulting from a deal between Nintendo and Philips. This deal would have led to Philips making a CD-based add-on for the Super NES, but it fell through. Philips was left with a license allowing them to release games with some of Nintendo's characters. So they made this, and three Zelda games.

In it, Bowser gets the idea to capture Princess Toadstool (big shocker) and hide her in one of a set of seven themed hotels, each of which is run by one of the Koopalings (with the exception of Bowser's Seizure Palace, run by Bowser himself, though you still fight the seventh Koopaling there). Taking the role of Mario once again, your goal is to travel through all the hotels, closing all the doors to complete each level. If you let all the doors get opened, get hit by an enemy, walk off either edge of the hotel (there's no side walls) or run out of time, Mario loses a life.

Another two Mario games were planned for the console, but Super Mario's Wacky Worlds (a sequel to Super Mario World) didn't get very far. Neither did Mario Takes America, for that matter.

Tropes used in Hotel Mario include:
Retrieved from "https://allthetropes.org/w/index.php?title=Hotel_Mario&oldid=1679965"
Categories:
Cookies help us deliver our services. By using our services, you agree to our use of cookies.