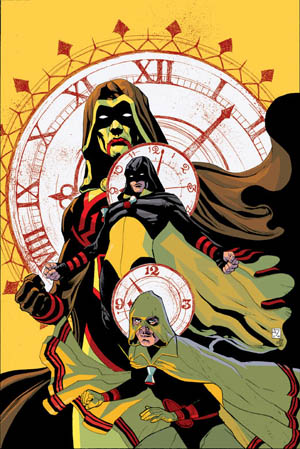 Meet the Men of the Hour

Hourman is a name shared by three superheroes from DC Comics.

The first was Rex Tyler, who first appeared in Adventure Comics #48 (March, 1940). He was co-created by Ken Fitch and Bernard Baily. One of the original "mystery men" of The Golden Age of Comic Books, Rex was a biochemist who discovered a particular mixture of vitamins and hormones that he dubbed "Miraclo" would enable enhanced strength, agility, speed and endurance for an hour before wearing off.

Tyler's decision to become a superhero was two-fold: 1) he wanted a human trial with a panel and subject he could trust (himself) and 2) he wanted the drug to be used "altruistically." As it ended up, he started his career by putting ads in the paper and aiding respondents. Eventually team-ups with other heroes led him to pool his resources with the Justice Society of America. Like most of his generation, a great deal of his crime-fighting career was in service to Franklin D. Roosevelt during World War II.

Rex's career ended, along with most of the founding members of the JSA, when he was aged to death by the Crisis Crossover villain Extant in Zero Hour. Next up in the line was his son, Rick, first appearing in Infinity, Inc. #20 (November, 1985). Rick spent time with other second-generation superhumans calling themselves Infinity, Inc. Rick was brash and overbearing in his career, embodying many of the darker aspects of his father's alter ego when left to run unchecked. Several events led to Rick giving up the mantle for a time, but he was ultimately stopped from continuing as Hourman by the illness that had ravaged his body from prolonged use of the toxic Miraclo. When the third Hourman found him, he was enraged at a robot taking up his father's identity. He attacked his usurper but was ultimately thrown into the Timepoint, a place of suspended time, where he would wait until a cure could be found several years later.

The third Hourman was an android called "Tyler" or "Ty" by his friends. He first first appeared in JLA #12 (November, 1997) who had travelled from far, far, FAR in the future to help the modern Justice League of America. Ty begins as a Harbinger of future crises, then transforms into Chekhov's Gunman in the DC One Million mini-series. Afterwards, his omnipotent power mixed with a general lack of experience and maturity led to him seeking out the most humanizing sidekick/mentor in the JLA's roster: ...Snapper Carr. In the midst of his solo adventures with Snapper and several other friends, Tyler spent time connecting with the newest incarnation of the Justice Society of America. Years later, after curing Rick of his illness and reuniting him with his father, Tyler took Rex's place in the time-line, allowing himself to be "killed" and giving Rex and his son a chance to find their place in the current world.

As of mid-2010, Rick operates with the JSA All-Stars squad as Hourman with Rex providing help as support staff. Tyler is still "in repair."

Tropes used in Hourman include:

Tropes for the first version:

Tropes for the second version:

Tropes for the third version: