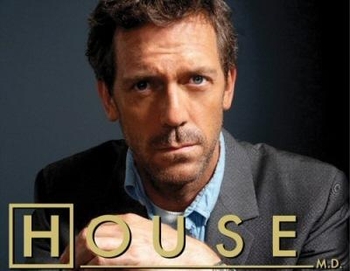 House (also known as House, M.D.) was a television series which debuted in November 2004 and ended in May 2012 centered around Dr. Gregory House, an expert diagnostician at (the fictional) Princeton-Plainsboro Teaching Hospital. House, a Deadpan Snarker played by Hugh Laurie, suffers from chronic pain in his right leg and is quickly identified by the cane he uses as well as his regular (or not so regular, depending on the season) downing of Vicodin. He is abrasive socially, professionally, and personally; he usually refuses to take on a case unless something about it piques his interest and he is known to engage in bizarre (and not always legal) hobbies and pranks while working. However, he is such a genius in diagnosing patients that the Dean of Medicine, Dr. Lisa Cuddy, allows him to continue. His only friend is Dr. James Wilson, head of the Oncology department.

The series is a medical version of a Police Procedural; every week a patient suffers unexplained, potentially deadly symptoms which worsen dramatically over the length of the episode. House begins by starting a brainstorming session with his crack team of doctors: Eric Foreman (no, not that Eric Forman), Allison Cameron and Robert Chase. An additional group of doctors were added in the fourth season: Chris Taub, Lawrence Kutner, and Remy "Thirteen" Hadley (Cameron and Chase went on to different positions within the hospital, but Chase has since returned). The last two seasons introduced doctors Martha M. Masters, Chi Park and Jessica Adams. They spend time listing the possible causes of the illness on a big whiteboard while House makes snide remarks and mocks every suggestion. They proceed to diagnose the disease incorrectly for the majority of the episode, subjecting the patient to a wide variety of tests that may or may not be ethically sound. Finally, Dr. House determines the actual problem in a Eureka Moment and reveals the diagnosis. In most cases the patient makes a full recovery, although in some episodes the patient still dies for one reason or another.

While House is ostensibly a physiologist rather than a psychoanalyst, the vast bulk of the diagnoses result from him verbally pummeling his patient and their relatives/associates into revealing all of the many steamy secrets they possess (typically abuse, sexual misbehavior, drug addiction, etc), one of which will prove instrumental in diagnosing their illness... after House has ruined their life.

Of particular note is the commitment of writers to the Dr. Jerk concept, as any real doctor who behaved this way would be immediately fired, jailed, beaten half to death, and run out of town by villagers with Torches and Pitchforks (and several of these things actually do happen to House as a result of his conduct). Among his professional behavior he has used the corpses in the morgue for personal experiments (or is hiding to avoid responsibility), broken a patient's fingers as a means of torture, helped a patient commit suicide, got an ailing patient drunk, verbally berates patients for their stupidity and/or lies and makes a habit of breaking into patients' houses. His personal life behavior isn't much better, as he has forged medical records for himself, slipped his best friend drugs, and stolen drugs from living and dead men alike and generally enjoys pranks and manipulation for fun. Although in most cases he has genuine medical reasons for doing what he does, he is generally known as a shameless manipulator and it is always left to interpretation how big of a jerkass he is. It's very rare to see him Pet the Dog, though he sometimes fakes such behavior for his own selfish ends.

Although it could be Hugh Laurie's acting that means that fans are willing to forgive him of anything.

Methadone is an long-acting synthetic opioid agonist that, like any opiate, causes euphoria. It is prescribed to treat pain in opioid-dependent patients as well as addiction in heavy users of high-potency opiates. Because methadone is many, many times more powerful than hydrocodone (it's listed as a greater than 2 to 1 conversion compared to baseline (morphine), whereas hydrocodone has no consensus but is known to be less than 0.33 to 1), methadone is never used to treat even the heaviest Vicodin abuse. That would be like prescribing 99 Bananas to someone addicted to wine... no matter how much wine they drink, taking shots of vodka just isn't going to improve the situation. There are also other opioids which are more effective at managing pain, so if they specifically wanted to curb House's Vicodin use (likely, due to the risk acetaminophen poses to the liver) they would step up to oxycontin (0.33 to 1) or ms-contin (1 to 1).
Methadone is used to prevent heroin abuse, mainly because there are a limited number of opioid receptors in the brain and methadone fills them up (preventing heroin's effects from being felt), and because it delays the onset of withdrawal symptoms for many hours, thus reducing both the cravings and incentives for abuse in patients who take it correctly. Methadone users continue to experience physical dependence, but after the addiction is under control, the dose can be lowered to reduce dependence.

The reaction of the other doctors to this line implies that all of House's fellows have thought about it.

Retrieved from "https://allthetropes.org/w/index.php?title=House_(TV_series)&oldid=1771930"
Categories:
Cookies help us deliver our services. By using our services, you agree to our use of cookies.