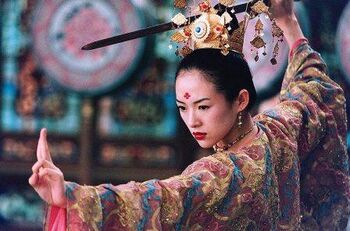 House Of Flying Daggers (original title: 十面埋伏) is a Wuxia movie directed by Zhang Yimou and released in 2004. Zhang had previously directed another Wuxia flick, Hero, and wanted to explore the genre further. He would later direct Curse of the Golden Flower.

The story, set in the waning days of the Tang Dynasty (9th century CE), depicts a love triangle between two soldiers and a young woman suspected of being an agent of a secret society, the titular House of Flying Daggers.

Tropes used in House of Flying Daggers include: