How to Train Your Dragon (animation) 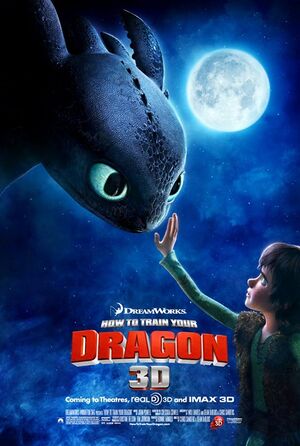 Based very loosely on a series of books for younger readers, How To Train Your Dragon is a 3D Dreamworks Animation picture released in 2010, directed by Chris Sanders and DeBlois. Its protagonist, Hiccup, is a young Viking who lives on the island of Berk, where men are tough, women are tougher, and dragons are evil, destructive, livestock-pillaging pests that must be destroyed on sight. Hiccup just wants to prove his worth - particularly to his father Stoick, the Viking chief - but Hiccup is gawky and brainy in a society that entirely values brawn.

Then one night, during a raid, Hiccup manages to bring down the most elusive, feared dragon of all: a Night Fury. Of course, nobody believes him (no one's ever seen one, much less injured it), so Hiccup has to go alone to find the creature so he can kill it and prove his worth - only when he does find it, all he can see is a wounded, frightened animal. So begins a clandestine friendship between two sworn enemies, as Hiccup nurses Toothless back to health and becomes the first Viking ever to ride a dragon.

It was later followed up with a short special episode, called The Legend of the Boneknapper Dragon. Gobber, Hiccup and the other Viking teens head out to hunt down a supposed renegade dragon called the Boneknapper, a dragon that wears bones as armor. An additional pair of shorts, Gift of the Night Fury and Book of Dragons, are being bundled together, presumably acting as a Christmas Special.

Jeffery Katzenberg announced that this is Dreamworks' new franchise, apparently now dubbed with the more flexible title, Dragons. Future ventures in the franchise include a TV series on Cartoon Network slated for 2012. A live touring show, How to Train Your Dragon Arena Spectacular is currently on tour and an online computer simulation in development for an as-of-yet unknown time.

For the book series, go here.

Tropes used in How to Train Your Dragon (animation) include:

Tropes for the DVD short film Legend of the Boneknapper Dragon:

Tropes for the DVD short film Gift of the Night Fury