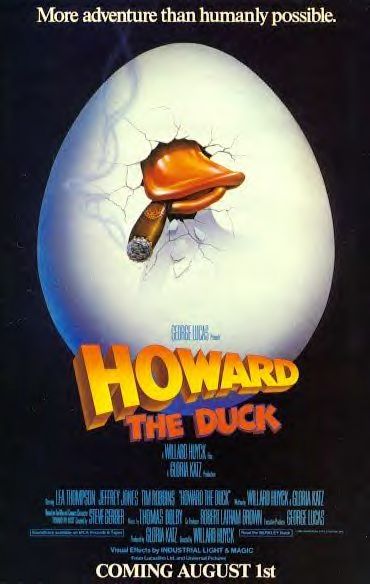 Based on a relatively obscure Marvel Comics character, Howard The Duck is a 1986 live-action movie about Howard, an anthropomorphic duck who is accidentally zapped to Earth during the test-firing of a laser.

During the course of the movie, Howard must get used to his surroundings in the human world, while trying to find his way back home. He must also avoid another alien being called the Dark Overlord, who has possessed Dr. Jennings (Jeffrey Jones, as himself), one of the scientists in charge of the original experiment.

Still with us? Great! The rest of the movie is like this.

One of the... less stellar cinematic endeavors by then-fledgling Lucasfilm, it is also the first Marvel Comics film adaptation to receive wide distribution, which may in part explain why they didn't try again until the late 1990s. Until the release of Blade, this was the highest-grossing Marvel film property. Really.

With the appearance of an almost-identical Howard in the post-credits Stinger of 2014's Guardians of the Galaxy, speculation is running fast and furious about a possible Remake set in the Marvel Cinematic Universe.

Tropes used in Howard the Duck (film) include:
Retrieved from "https://allthetropes.org/w/index.php?title=Howard_the_Duck_(film)&oldid=1542151"
Categories: